Here is my first week's blog on ancestors. No Story Too Small's challenge says it can be any ancestor or even a mystery you're working on etc.

I think I will start with the mystery I started working on recently. My paternal 4th great grandparents were Abraham Zerkel (Zirkle, Circle, Circkel - remember there are 39 spellings of Zirkle! I will use Zirkle since that is what I usually use)   Abraham's burial is here   and Margaret Maurer. (Margaret is buried here) Both are buried in the Shaffer cemetery in Champaign County, Ohio.

I am going to discuss MARGARET in this blog, but since women are so much harder to research you almost can't remove them from their spouses, especially during this time frame. So you'll need to know about both Abraham and Margaret.

According to the Findagrave memorial, Margaret was born Sep. 14, 1781 in Virginia. While this is plausible, I have no documented proof. Abraham was born in VA, and they were married in VA, but this does not mean she was necessarily born in VA. Abraham's family came to VA from PA so it's possible her family did as well.
I recently found a transcription from the Overseer of the Poor in Shenandoah, VA (click here) that lists in 1787:
- Overseer of Poor to bind George Mower, son of Michael, dec. to John Rouch. He is 11 yrs old Dec. 1, last.
- Overseer of Poor to bind Margaret Mower, daughter of Michael, dec. to Jacob Pennywitt. She is 6 yrs old Aug. last.

That would follow with a birth date of 1781. It also would explain how she was introduced to the Zirkles, as I cannot find any Maurers in the same area as the Zirkles. If George Mower is the brother of Margaret, John Rouch (Roush) was related to Catherine Roush (maybe her father), who married Abraham's brother George. Likely she would have kept in touch with her brother. The Pennywits were also in the area and married into various Roush and Zirkle lines...I just am not completely familiar with them at this time. If anyone else is, please drop me a line or a comment!

Margaret's obituary, published in the Urbana Union Newspaper, 21 December 1870, states she moved to OH as a little girl. (As you read more, perhaps this is not the correct obit, but it fits w/ her death date) 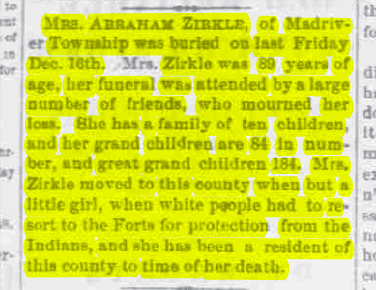 So that confuses me as to whether this is a correct marriage record (from Shenandoah County Marriage Bonds 1772-1850 by Vogt and Kethley):

According to another source, Abraham was a pioneer in what would become German, Clark County, Ohio, in 1805. (See American Family History)

In doing this blog, I have determined that I need to review these children. I have several of them listed as born in Shenandoah, which clearly is not possible if they lived in OH from 1805 on. I do have Abraham's Will settlement so I will sit down and review this as well. It is the document I used to prove Noah as his son, as I have nothing on Noah til his marriage.

Abraham is found in the censuses for Clark County, OH from 1820-1840 w/ the correct number of family members (censuses prior to 1850 do not list names other than the head). The 1810 census was lost for all OH counties except Washington, so I can assume if he was in Clark in 1805 and 1820, likely he was there in 1810 as well. In 1860 and 70 in Clark County, it is Abraham, Margaret, and Polly or Mary Gentis (poss wife of their son Jonathan who is deceased, but not sure why she's listed as Gentis and not Zirkle...) Abraham died in 1860. The closest thing I find for Margaret is in Jan 1870 the census in German, Clark, OH lists Rebecca Zirkle age 92 with Mary Gentis. Age and name doesn't match exactly but it's the same people as living together as in 1860 so I am not sure what to make of that either. Margaret died in December 1870 so it's still before she passed and the most likely census.

But the main purpose of this exercise is to focus on Margaret. Who is she? Who were her parents?
-Marriage record states her father was Michael. The VA Minute Book entry states a Michael Mower died before 1787. There's a Michael and Christina Maurer listed in the Old Pine Church Baptisms records with a daughter named Catherine born in 1784, these could be Margaret's parents. This follows along with something else I found -
There is a George Michael Maurer, son of Phillip, b. in Swattara, PA 13 Jan 1756. (Records of Rev. John Casper Stoever : baptismal and marriage, 1730-1779, page 27)
There is a Michael Maurer, pvt in PA Revolutionary War records (no other info listed- from acom and Fold3)
--> if Catherine born in 1784 was Michael and Christina's first b. in VA, then they could have just recently come from PA to VA. But then, why wasn't Catherine listed being bound out in 1787? Unless she died. I really need a copy of that Michael's probate record. That will be on my to do list.

I am leaning toward the Michael Maurer from PA as her father, but until I find anything more I am at a loss. I can only work on this occasionally so I'll post updates as I can.

I welcome comments and suggestions! If there is anyone out there with clarification, I'd love to hear from you!