Ok, so I am only kidding about the Jingleheimer-Schmitt. (Though I do have a Schmid on Rose's husband's side.) Today I decided to go only a little ways back in my family, as far as generations go; though Rose was born over 144 years ago, she is my great-grandmother. My very own grandfather, her son Earl Roy Shaffer, was born over 120 years ago! It's mind boggling to think in those terms. I don't even have a picture of her. In fact, the only photos I have are of her children, taken in the late 1950s. Some day I hope something turns up in someone's attic! Maybe this summer at the family reunion of her great grandchildren something will turn up!

Rose is the reason for this blog. It's her line I have spent countless hours researching and learning about. It's this line that convinced me I wanted to go back to school and become an archivist. So between learning about her and her family, and the inspiration of knowing that her grandson's wife (my aunt by marriage) was also an archivist and genealogist, it's their fault I am back in school. :) And I couldn't be happier. (Well, ask me that after a stressful day of homework sometime) But back to Rose.

Rose Rebecca Minter Zirkle (sometimes Rosa) was the first child born to Rebecca Jane Evilsizor Bissett and Joshua Benton Zirkle. I've blogged about Rebecca Jane here and how she lost her first husband, Jeremiah Bissett, in the Civil War.  It's a heartbreaking story but one shared by so many that lived during that time. Though it seems that Rebecca's children - Ida Belle and Joseph - from her marriage to Jeremiah did not live with them full time, they were always very close with Rose, as evidenced by several newspaper articles, including the family reunion I blogged about here.

Rose was born 25 July, 1870 in either Clark county or Champaign county, Ohio. I have records that state both. The family homestead had been on the border of the two counties, so it could have been either place. However, by this time the family had lost all property and money was scarce. In fact, the family farm had been lost a generation before, with Josh's parents. So I would imagine times were tough. Josh was a farm laborer, and he and Rebecca had 5 children that lived (per the 1900 census she was mother of 11 total), plus Ida Belle and Joseph, and there are 4 that I can't account for anywhere. So things were busy around the house, and Rose probably had to help out with the other siblings. I often wonder if Rebecca and Josh had German accents. They were both raised in strictly German communities, and Josh's parents were members of the family Lutheran church. Somewhere in Josh's time the affiliation with the Lutheran church was lost, because Rose wasn't raised Lutheran, as far as I can tell. Maybe they were just more concerned with making ends meet. It's something I am deeply interested in and hope to study a bit more closely some day.

In 1880 the family was living in German township, Clark, OH. Not much later, Rose was married at the tender age of 16 to Aaron Winfield Shaffer, her (gasp!) 2nd cousin twice removed. Here's a tree to remind you: 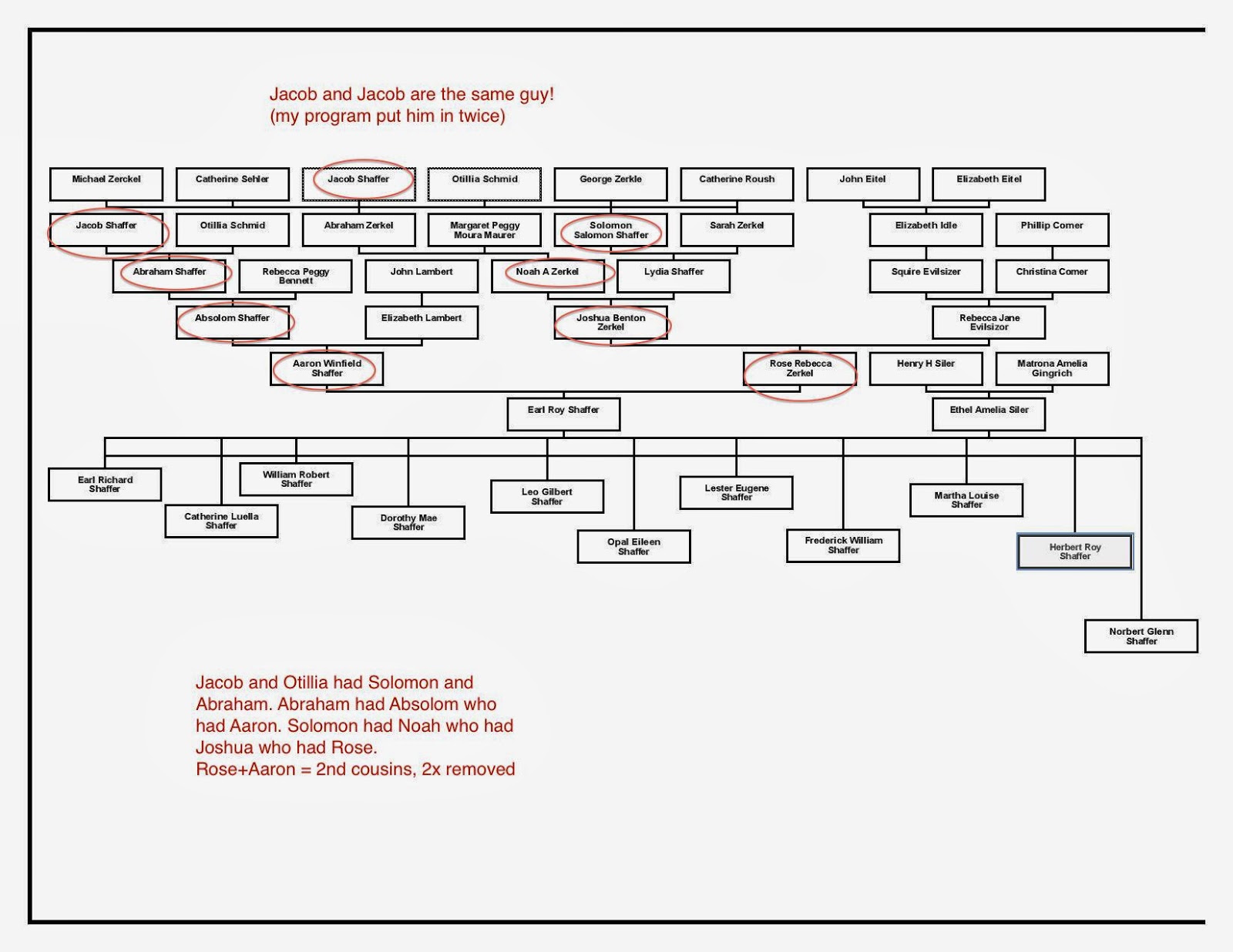 Anyway, Rose and Aaron were married 16 November, 1886 in Springfield, Clark Co., OH. I won't post the marriage license because it's hard to read, but it says "bride is over 18" - which clearly, she was not. It's funny because my grandparents did the same thing - my grandmother was 16 when she married my grandfather too and lied on her marriage record too.  But here's a newspaper article about Aaron and Rose's nuptials:


Since we don't have the 1890 census (the bane of all genealogists' existence!), I am not sure where they lived then, but her first child, William Clyde Shaffer was born 23 May 1888 in Champaign county, OH. My grandfather, Earl Roy Shaffer, was born 25 August 1890 in Champaign. Now here's where it gets interesting. I found out quite by accident recently that -something- happened and Rose and Aaron were forced to put their two sons in the Champaign County Children's Home.

Then his brother Willie (who I always had heard was called Clyde):

It's interesting because Rose is listed in the infirmary in both cases, but there are no records of why she was there or when she was released or anything of that nature. One archivist mentioned that Ohio was in a depression at this time, but that still doesn't explain whether she was ill or not. She WAS, however, pregnant. She gave birth in the infirmary to her daughter, unnamed here in this record, but my great aunt Armour's death record states she was born 24 June, 1894. More than likely, she was born June 21, 1894, based on this:

There are no other records on Rose or her baby daughter or when they were released, but the boys went home, as you can see, in 1897. By 1900 the family was living together again in Casstown, Miami, Ohio, and they'd added to the family daughters Ilo and Esther, and son Albert (Albert is another fun story, maybe he will be next week's profile.) By 1910 they are found in Jackson, Champaign county, and have added son Clifford to the family. In 1920 they are living again in Elizabeth, Miami county. At this time their children have moved out and married and the only one still at home is Clifford - and also living with them is Mary Francis Yingling, their granddaughter, daughter of Esther and her first husband. Interestingly enough, in 1920 they lived next door to the Knoop Children's Home. This made me hopeful that I could find their house, since Knoop still stands. Some kind people took photos of the area for me, but I don't think any of the homes in the area are where they lived.


There are some great old shots of the home in various books and a fantastic one from ancestry.com but who knows where it came from originally so I don't know about permissions. I won't post it til I figure that out.

It confused me when I couldn't find Rose after that. She's nowhere to be found and I couldn't find her death record. That's because she got married again! Who knew? Not anyone in my family, apparently, at least not the generation of cousins I still have living. But then again, no one living knew her so....

I found a couple of city directories that list her living at 911 E. Canal Street, Troy, Ohio, in 1929 and 1933 and the 1930 census lists Esther and her family living at that address so I'd assume they just missed listing Rose too.

Here's a pic of the house as it looks today:

But sadly, she passed away just 5 years later, 31 Dec 1938, of pneumonia and heart failure, at the age of 68. She is buried with Aaron in Riverview cemetery (see here). Oddly, her obituary lists Frank and his children, yet his obit never even mentions Rose. (See Frank's obit here)


And here it says she was a member of the First Congregational Christian Church of Christiansburg. I'm interested as to when she converted....Or was she never Lutheran? Her grandparents were members of the Zirkel Lutheran Church - there were two Zirkel Lutheran churches actually - and one was started by Rose's great grandfather Solomon Shaffer (or at least services were held on his property) and the other by her great uncle Abraham Zirkle (Solomon's brother in law). I haven't looked into it, but I wonder if Frank Fries was Congregational. Something I will look into in the future.
Posted by Unknown at 2:15 PM