I can't believe I haven't blogged about Noah Zirkle yet. He and his wife Lydia are the reason I am STILL on this Zirkle line, after three years, and haven't really moved to any of my other lines (Evilsizer/or, Siler, more of the Shaffers, or the rest of my husband's tree or my mom's tree!). I have been putting together everything I can to learn about this line in the hopes that I will stumble on the rest of the story for Noah and Lydia. They are one of the couples in this line that are CONSTANTLY mixed up with their cousins in public trees. For awhile I would correct people, but most of the time people ignored me. I hope that this blog will set the record straight. Really, the only things I don't know about Noah and Lydia are when Noah was born and when they both died. I have enough material that I can tell you approximately when these things happened. And I have enough material gathered on the Noah and Lydias they are usually mistaken for to prove that MY Noah and Lydia are not the other people they are mistaken for. I'll happily discuss this with anyone who has questions.

Because everyone and their brother in this family was named Noah, Abraham and Lydia, let me post a few notes before I start. I am going to have to create a visual chart somehow since FTM doesn't do one that shows this relationship to my satisfaction. Hopefully you can follow.

Abraham Zirkle (1780-1861, wife Margaret Maurer [1781-1870]), the father of my Noah,  had a brother George (1774-1848, wife Catherine Roush [1777-1860]). George and Catherine had a son Abraham (1798-1875) whose second wife was Lydia Shaffer (1801-1900). In 1847, this Abraham and Lydia deeded an acre of property in Champaign county, OH, to erect the Zerkle Lutheran Church and burial ground. This Lydia Shaffer's parents were George Shaffer and Elizabeth Brown. Abraham and George Zirkle's youngest brother Jonathan Zirkle (1789-1855, wife Elizabeth Wolgamood [1793-1853]) had a son named Noah Zirkle (1820-1897). He married Lydia Whitmyer. These two are constantly confused with my Noah and Lydia, but the easiest way to know which you are dealing with is that this Noah and Lydia never left Virginia; this Noah was also a private in the Civil War. My Noah and Lydia settled in Ohio where they were married and died and there are no military records for my Noah.

Are you with me so far? We're up to three Lydia Zirkles (two of them nee' Shaffer), two Abraham Zirkles, and two Noah Zirkles. Here's another Noah: he was the son of Jacob Zirkle (1782-1863, wife Mary Summers). Jacob was another brother of Abraham, George, and Jonathan. This Noah Zirkle (1820-1889) married Martha Foltz. He is consistently mixed up with my Noah and their children intermixed because Noah and Martha lived in German, Clark County, OH in 1850 and 1860. But they then moved on to Illinois. That's one way to tell them apart. Also, this Noah was drafted to the Civil War from German, Clark county, OH. I do not see that he served, but truthfully haven't looked much farther for more records. I am pretty sure this record belongs to this Noah and not mine, but it is hard to tell. The reason I think so is because this lists Noah as born in Virginia. While I don't have proof where my Noah was born, read on and I will tell you why I believe he was born in OH. 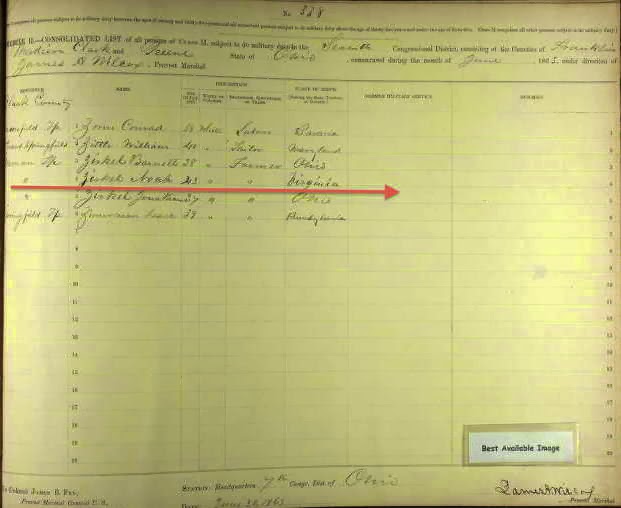 There are four more Noah Zirkles in the family, but these are the most confused ones I have seen. Hope you aren't asleep yet.

So my Noah Zirkle was the son of Abraham and Margaret (Maurer) Zirkle. Based on census records, he was born about 1822-1823. A publication from the 1920s lists his approximate birth year as 1815. Regardless of which is correct, his father Abraham was a pioneer in Clark County, Ohio in 1805. (*Note: at this time it was still Champaign county; Clark wasn't formed until 1818 but everyone lists these guys as pioneers of "Clark")  Therefore, Noah had to have been born in Ohio. He doesn't appear in records again until he married Lydia Shaffer (b. 25 Aug 1820, Shenandoah, VA, baptized at the Old Pine Church in New Market) the daughter of Solomon Shaffer and Sarah Zirkle. (Sarah is one of George and Catherine (Roush) Zirkle's daughters so yes, Lydia and Noah were first cousins, once removed. Happened all the time for the families in these areas!) on 20 June, 1844, in Champaign county, Ohio.


Noah and Lydia were found in the 1850 and 1860 censuses farming in Mad River, Champaign county, Ohio. Their children were as follows:

Now here's where it gets confusing. In 1863, there was a Chancery court record indicating that Noah had passed away and that in 1862 he mortgaged 164 acres to David Loudenback, which was being foreclosed upon. (per Public Records Of Champaign County, Ohio, Chancery Records of the Court of Common Please Record Books 24-38 Vol. 2. Abstracted by Pat Stickley and Denise Kay Moore, Champaign County Genealogical Society)

But there are no records of his death, and he is not buried in either the Shaffer, Zerkle or Terre Haute cemeteries, where the rest of the families are buried. Lydia was not found either. I realize this is the middle of the Civil War, and that obviously the family is poor since they just lost their property, but I still think there should be a record somewhere of something relating to his death! Even a newspaper blurb! Something!

Lydia was next found in the 1870 Mad River, Champaign county, OH census living with her son Joshua and his wife Rebecca and Rebecca's two children from her first marriage, right after Josh and Rebecca got married. Lydia's daughter Hannah and son Harvey are also living with them.

In 1880 Lydia was living with her son Barnett and granddaughter Antoinette, who is erroneously listed as her daughter.  Antoinette was actually the daughter of Rebecca A. Jane Zirkle and (possibly) Charles Shaffer, but not sure yet who her father was, as she was listed in 1880 as Zirkle but as Shaffer elsewhere. I should blog about Rebecca A. Jane's family, they are all crazy!

On 11 Feb 1890 a corrective deed was filed with the Champaign County Recorder in Book 70 pg 448 stating that a portion of the seized property was erroneously transferred to Jonathan Long and Susan Michael. Nowhere in it does it mention a Life Estate for Lydia Zirkle.

No records, news articles, nothing exists showing her death. She was also not buried in the Zerkle, Shaffer, or Terre Haute cemeteries. I am at a loss as to why neither of my 3rd great grandparents exist in a cemetery anywhere, especially where the rest of their family was buried, and why there are no records of their deaths.

I am currently working on an in depth study of the three cemeteries mentioned above for a couple of my graduate classes. I hope that somehow I will come across Noah and Lydia's burials, but without the ability to go there for awhile I have to rely on what I can do from afar. If anyone is familiar with these cemeteries, please leave me a message!